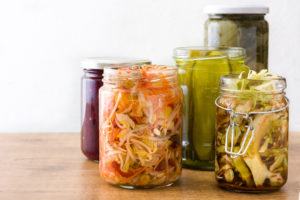 Fermentation is a technique that has been used to preserve food for thousands of years. Many places without reliable refrigeration or electricity still use fermentation to store food, but even many of those with access to refrigeration implement fermented foods into their diets because they’re delicious and nutritious! The most common kind of fermentation in foods is lactic acid fermentation, in which bacteria and yeasts are used to convert starches or sugars into lactic acid. This is how foods like pickles, sauerkraut, sourdough bread, and kimchi are made. It’s also the method used to make yogurt, which we have talked about previously. The other common forms of food fermentation are ethyl alcohol fermentation (wine, beer) and acetic acid fermentation (apple cider vinegar).

Are fermented foods good for you?

Yes! Fermented foods offer many health benefits. The one most people have probably heard about is probiotics. Fermented foods are packed with probiotics. They have very high CFU counts and generally anywhere from one to five different healthy bacterial strains. Even just a few tablespoons of fermented sauerkraut can contain several millions or even billions of probiotics.

The merits of fermented foods for probiotics are well known, but fermented foods offer health benefits beyond probiotics. The chemical reactions taking place during the fermentation process can lead to more nutrient rich versions of the original food. For instance, take natto, a kind of traditional Japanese fermented soy bean. According to this study, natto contains three times the quantity of vitamins B1 and B2 and five times the quantity of B12 than the original soybean.1 That’s a big nutrient bump! Many fermented foods receive similar nutritional boosts due to the chemical alterations taking place during the fermentation process. Fermented foods can also aid in digestion by breaking down some of the more difficult to digest proteins or fats, allowing individuals with IBS or other gastrointestinal sensitivities to consume them more easily.

Is there anything I should know when shopping for fermented foods?

Absolutely. While it is entirely possible to meet your body’s probiotic needs with fermented foods alone, it’s not necessarily simple. You need to know exactly what to look for when shopping for fermented foods. Many foods that are commonly thought of as fermented are actually just pickled. Vinegar pickled cucumbers are not the same as fermented cucumbers, and will likely not contain any live and active bacterial cultures. Likewise, many grocery store versions of commonly fermented foods are pasteurized during the production process. Pasteurization involves mildly heating food products in order to eliminate pathogens and extend shelf life. Unfortunately, even this mild heat is far too severe for live and active bacterial cultures, so bacteria in pasteurized products are killed off before they hit store shelves. Lastly, many store-bought fermented foods can have added sugars, dyes, preservatives, or other additives that can affect nutritional value and limit the number of healthy bacteria. Heavily sweetened products in particular are big no-no’s, as probiotics feed off of sugar. This hastens their metabolism and causes them to die sooner than they would without sugar present. This means that these products often have less live and active bacteria than their counterparts with no sugar added.

As you can see, shopping for fermented foods requires knowing what to look for going in. Find fermented foods that state that they contain live and active cultures on the packaging. Make sure that they have never been pasteurized, and check the ingredients carefully to make sure there are no added sugars, dyes, or unnecessary additives. Fermented foods should have a short and pronounceable ingredients list. If you’re up for it, you can avoid all of that hassle by making fermented foods yourself at home. There are countless fermentation guides to be found online that can help you to create your own healthy supply of salty and savory treats.

If I’m eating fermented foods, should I still take a probiotic supplement like Probonix?

Probably. Fermented foods are great for you, but it can still be tough to give your gut what it needs with fermented foods alone. While it’s true that fermented foods have high CFU counts, it’s also true that those bacteria have no natural protection from the stomach acid. You are still providing your gut with healthy bacteria, but a very small percentage of the bacteria in your fermented foods make it to the gut alive, especially compared to something like Probonix with its special acid coating that protects the probiotic bacteria on their way through the gut.

It is also more difficult to target specific strains for individual issues with fermented foods than it is with a supplement like Probonix. This is particularly true for Bifidobacterium, a classification of strains that can help with constipation, digestive problems, stomach flu, and many other issues, and one that is much less common among most fermented foods. Lactic acid fermentation leads primarily to Lactobacillus strains. When it comes to strains other than Lactobacillus, you need to look to other kinds of probiotic rich foods or a probiotic supplement.

Lastly, Probonix fits much more cleanly into diets of all varieties than fermented foods, as it is free of wheat, soy, dairy, gluten, and other common allergens. Many fermented foods are derived from or contain these allergens, such as yogurt and kefir (dairy), tempeh (soy), sourdough bread (wheat and gluten). This limits the selection of fermented food choices available to individuals with these allergies.

Does that mean I should skip the fermented foods and stick to Probonix?

No! Probonix is great, but the best option is to do both. An influx of beneficial bacteria can only help you in the end. Fermented foods provide you with healthy bacteria, digestive aid, and nutritional benefits, while Probonix supports your gut with strain diversity, protection from stomach acid, and the Bifidobacterium that fermented foods often lack. They are perfect complements for each other.