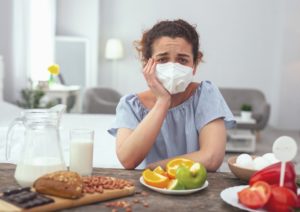 Peanuts, soy, dairy, gluten… there are so many allergens to worry about these days. Oral immunotherapy (ingesting small amounts of an allergen to increase the threshold that triggers a reaction) is successful for some patients, but it only works for the specific allergen that is targeted and can be accompanied by some unpleasant gastrointestinal side effects. Researchers are continuing to look for treatment options for preventing or reversing food allergies in patients, but the best option currently is to avoid them altogether. Thankfully, a new study from Brigham and Women’s Hospital and Boston Children’s Hospital suggests that may not be the case for long.

In other words, the administration of these protective bacteria changed the immune response to food allergens. They did so by targeting a group of cells that modulates the immune system and changing their default response from allergic responses to tolerant responses. This was found to be true in both mice and human infants.

What are the implications of this study?
Researchers have long since theorized that bacteria could be instrumental in dealing with food allergies, but isolating a few bacteria out of the hundreds of different types of bacteria that colonize the gut and figuring out which ones are responsible for protective properties against allergens has been no simple task. This study is particularly noteworthy in that regard. As Georg Gerber, MD, PhD, MPH, first co-author and chief of the Division of Computational Pathology in the Department of Pathology at the Brigham said, “Being able to drill down from hundreds of microbial species to just five or six or so has implications for therapeutics and, from a basic science perspective, means that we can start to figure out how these specific bacteria are conferring protection.” This study brings us one step closer to attributing specific benefits to specific strains in the gut. With each new discovery in this field, the path towards effective bacteriotherapy treatments becomes a little clearer.