The Gut-Brain Connection: Can Microbes Affect Your Mood? 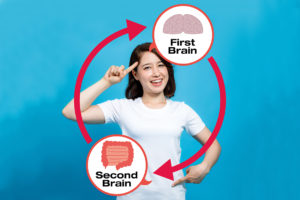 Each year, it is becoming increasingly apparent that microbes are essential components of our bodies and our overall health. Probiotics are everywhere, and even everyday consumers are looking for easy ways to incorporate healthy bacteria into their diets. Bacteria have important effects on every day bodily functions like digestion and immune response, but there is a significant amount of new and exciting research indicating that microbes also have strong implications for our mood and behavior.

When the Human Microbiome project began in 2007, skepticism for the project and the role of microbes in the body was high. This skepticism has been diminishing each year, as more and more research has surfaced supporting the impact of good bacteria in the body for supporting the immune system, improving digestion, and dealing with issues like diarrhea and IBS.  Research on bacteria affecting mood is newer, and as such, it has been slower to gain traction. In September 2014, the National Institute of Mental Health awarded four grants, each worth up to $1 million, to fund new research on the gut microbiome’s role in mental disorders. For many in the world of microbial science, this has served as affirmation of the importance and legitimacy the gut microbiome and its potential impact on mood and mental health.

All of this sudden attention isn’t terribly surprising considering the scientific evidence of a gut-brain axis or a gut-brain connection.1 This connection consists of bidirectional communication between the central and enteric nervous systems that links the emotional and cognitive centers of the brain with peripheral intestinal functions. More recent scientific advances have discovered the importance of gut microbiota in influencing these interactions.

What are some examples of gut brain connection in action?

Scientists in Norway examined feces in 55 people and found that certain kinds of bacteria were more likely to be prevalent in patients suffering from depression. Similar findings have been made related to anxiety, hyperactivity, and even autism.

A team of researchers from Ireland and Ontario published a study involving mice in a forced-swim test in order to test for “behavioral despair”, or depression. One group of mice was supplemented with L. rhamnosus, a bacterium that is known to release GABA, an inhibitory neurotransmitter. These mice swam longer and spent less time in “behavioral despair” than the mice without L. rhamnosus supplementation, indicating that changing the microbial balance of these mice also altered their neural chemistry to a degree that their behavior and mood was noticeably different.

It is important to note that research in this area is still in the early stages, particularly when it comes to human studies, but it is underway. In a study conducted just a few months ago, a group of healthy adult women were separated into two groups based on the dominance of specific bacteria.3 The women exhibited very clear differences in brain connections based on which kind of bacteria was most prevalent. After looking at photos that would be considered disturbing, upsetting, or offensive, the women that had more Prevotella bacteria displayed more negative feelings, like anxiety, distress, or irritability.

The results of this study very clearly support the concept of the brain-gut connection, and they strongly suggest that gut microbes could have a strong impact on mood and behavior in humans. In May 2016, the US government launched a National Microbiome Initiative with an overall budget of half a billion dollars, so rest assured that more human research will be surfacing around this topic in the next few years. Let’s hope the results continue to be promising and lead to new avenues for effective health care in the future.