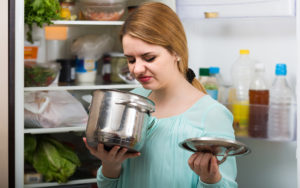 Inflammatory bowel diseases (IBD), such as Crohn’s disease, are chronic, life-long conditions that can be treated, but not cured. According to 2011 estimates, they affect as many as 1.6 million Americans. The number of people that suffer from human bowel diseases continues to grow every year, particularly among adolescents. Luckily, there is an increasingly large body of evidence supporting the notion that understanding gut bacteria can lead to a better understanding of human bowel diseases.

One recent study supports that view by indicating that common food-poisoning bacteria can accelerate the growth of adherent-invasive E. coli (AIEC), a bacterium that has been linked to the onset of Crohn’s disease.1 The study was headed by Dr. Brian Coombes, a professor in the Department of Biochemistry and Biomedical Sciences and the Michael G. DeGroote Institute for Infectious Disease Research at McMaster University.

Crohn’s disease is a chronic inflammatory disease of the digestive tract. It is a debilitating disease that can lead to severe abdominal pain, diarrhea, fatigue, and weight loss. Dr. Coombes said, “This is a lifelong disease that often strikes people in their early years, leading to decades of suffering, an increased risk of colorectal cancer, and an increased risk of premature death”. Coombes indicates that the study’s results could lead to new diagnostic tools that would be able to identify AIEC-colonized individuals who may be at greater risk for Crohn’s disease. “We need to understand the root origins of this disease — and to use this information to invigorate a new pipeline of treatments and preventions. It has never been more pressing,” he added.

This study suggests that discovering the connections between specific gut bacteria and corresponding diseases could be a productive avenue for future research. Identifying these connections could give scientists more complete information about disease origins and doctors more avenues for future patient treatment.