Welcome back to the final part of our Leaky Gut series. In part 1, we learned that the gut barrier protects the body from bad foods and harmful substances passing through the digestive tract. In part 2, we learned that leaky gut allows unwanted antigens to get passed the gut barrier and into the blood stream. In this final section, we will be tying together the information we learned from the first two parts to understand how Leaky Gut can lead to autoimmune diseases.

In a nutshell, autoimmune diseases work something like this. When the gut barrier is leaky and allows large particles to enter into circulation, the white blood cells will respond by scanning and identifying foreign antigens, then signaling killer cells to attack anything with a matching “fingerprint”.1 Some antigens have shapes or structures that look like other organs in the body. This can cause killer cells to become confused and attack everything with a similar structure, including healthy organs in the body. 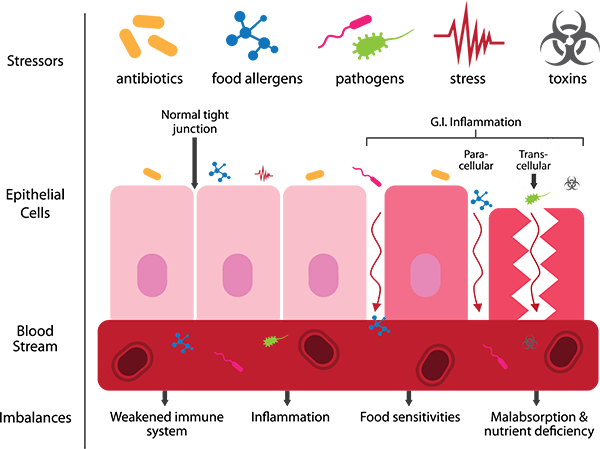 For example, let’s imagine that the foreign substance is an intact food protein. Intact proteins are not supposed to be allowed into blood circulation under normal circumstances. Proteins are supposed to be broken down into individual amino acids before they are allowed to enter circulation. However, if the gut barrier is leaky, intact proteins can get passed the barrier before they are properly broken down. If there happen to be proteins in the thyroid tissue that have a similar structure and shape as the intact food protein that the body has scanned as an invader, the immune system will then confuse the two and begin attacking the proteins in the thyroid as well.

Unsurprisingly, the body attacking itself can lead to some pretty serious health issues. Hashimoto’s thyroiditis is an autoimmune disease that can result from the exact scenario described above. A more serious instance occurs when the invaders look similar to nerve tissues. This can lead to an attack on the nerves, resulting in Multiple Sclerosis. The same logic can be applied to Rheumatoid Arthritis if the antigens look similar to your joints.

Approximately 50 million Americans suffer from some type of autoimmune disease. This is the number one condition that plagues Americans. Even though more people die from heart disease and cancer, research is indicating that leaky gut may also contribute to both cancer and heart disease. Autoimmune diseases are the third leading cause of morbidity (rate of disease) and mortality (death rate of disease) in the industrialized world, just behind heart disease and cancer respectively. However, leaky gut does not stop at autoimmune disease. It has been linked to multi-organ system failure, and systemic (whole body) disease and immune dysfunction. It has also been associated with asthma, eczema, psoriasis, Crohn’s disease, and a number of other inflammatory conditions.

Based on the oft-overlooked connection between the gut and diseases of all sorts, a healthy intestinal lining could prevent and perhaps even cure many of the chronic diseases that plague us today. Perhaps Hippocrates really was correct when he said, “All disease begins in the gut!”

People who liked this blog, also read these: