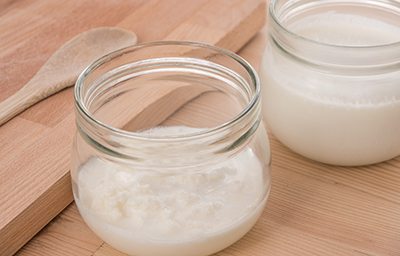 At Humarian, we occasionally receive questions about the viability of Probonix because it didn’t pass the “milk test” or because it didn’t work as a yogurt culture. Now I’m sure many of you are wondering, “What in the heck is a milk test?” The milk test is a process that many websites advocate in order to test the viability of a probiotic product.

The milk test is as follows: Add a probiotic supplement to 4 oz. of cold milk. Place the glass in a room temperature location and leave for 24 to 48 hours. Check the glass after time has elapsed. The probiotic is considered viable if the milk curdles or forms a yogurt like consistency.

How does the milk test work?

Milk curdles when it becomes too acidic. Normally, the proteins in milk float around freely and repel each other, allowing them to float without clumping and provide milk with a smooth texture. When the pH drops and becomes more acidic, these proteins start to attract one another and clump up. Certain live probiotics can make milk acidic by fermenting lactose (the sugar in milk) to produce lactic acid.

This is actually the same way that yogurt is produced. You buy a starter culture kit containing traditional fermenting strains, like Lactobacillus bulgaricus or Streptococcus thermophilus. Then you mix it in milk, let it sit and ferment, and voilà, yogurt!

So what’s the problem with the milk test?

The problem is that the milk test is not reliable. This test only works for certain kinds of probiotics that have been prepared in certain manners. In order for the milk test to work, the probiotics need to be able to interact directly with the lactose in the milk. This works fine for capsules where you can pour the probiotic powder directly into the milk, but many probiotics are microencapsulated, enteric coated, or acid coated. These probiotics are prepared in a manner that allows them to better survive stomach acid, but it means they are not able to ferment lactose in milk because the milk is not acidic enough to “activate” the probiotics by breaking down the protective coating.

Another reason the milk test is not reliable is because not all strains of bacteria ferment lactose equally. Lactobacillus bacteria can convert lactose to lactic acid under normal conditions, but Bifidobacteria can only produce lactic acid when very little oxygen is present. Thus, Bifidobacteria do not curdle milk in the milk test. Likewise, they will not be able to produce yogurt.

What about Probonix and the milk test?

I have good news for you. Probonix will not pass the “milk” test, and it cannot be used to make yogurt, but it IS viable! Again, the milk test proves itself unreliable. This is due to a couple key reasons:

As you can see, Probonix cannot be tested using the milk test because it is prepared in a manner that allows it to more effectively survive the trip through the stomach acid. If you still have concerns about the overall viability of Probonix, check out our research study demonstrating overall survival rates and effectiveness.