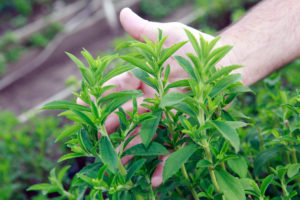 If you read through our previous stevia blog, you learned that stevia is not an artificial sweetener like most sugar alternatives, and you learned that rumors about stevia being dangerous do not have solid scientific data to support them. In reality, not only is stevia a safe and practical alternative to sugar and other sweeteners, it has also been shown to have therapeutic benefits beyond making taste buds happy. According to research, stevia has demonstrated anti-hyperglycemic, anti-hypertensive, anti-inflammatory, anti-tumor, anti-diarrheal, diuretic, and immunomodulatory effects.

Perhaps the clearest and most pronounced benefit of stevia is to blood-glucose and insulin levels, and to diabetic patients in particular. One study indicates that stevioside may be advantageous in the treatment of type 2 diabetes.1 It was able to reduce blood glucose levels in type 2 diabetic patients, indicating beneficial effects on glucose metabolism. Other studies came to the same conclusions, as intervention trials in diabetics revealed that stevia significantly lowered fasting and post-prandial blood glucose levels in addition to reducing serum triglycerides and very low-density lipoprotein cholesterol (VLDL-C) levels.2 Stevioside has also been found to increase insulin sensitivity, reduce post-meal blood glucose, and delay the development of insulin resistance in rats on a high-fructose diet.3 Another study compared the effects of stevia to those of some other common sugar substitutes.4 The results indicate that compared to sucrose or aspartame consumers, human stevia consumers had lower post-meal blood sugar levels and much lower post-meal insulin levels. The stevia-consuming group also did not have any of the sweet cravings that sugar and some alternative sweeteners induce, and their blood-sugar profile was more stable.

Along the same lines, steviol glycoside has been shown to reduce both systolic blood pressure and fasting blood glucose levels.5 Another study testing the efficacy of stevioside in Chinese patients with mild hypertension over a two-year period also gave promising results.6 The researchers found that a 500mg intake of stevioside three times a day significantly reduced systolic and diastolic blood pressure compared to the placebo group. There were no reported or detected side effects.

There are numerous studies available that suggest stevia may have anti-cancer properties. In one, females that were fed stevioside had a reduced occurrence of breast cancer tumors.7 Another Japanese study found that steviol glycosides exhibited an inhibitory effect against inflammation and tumor promotion.8 The results were significant. Groups treated with 0.1mg and 1.0mg stevioside mixture produced 2.2 and 0.3 tumors per mouse, while the control group without stevioside produced 8.1 tumors per mouse. These are 73% and 96 % tumor reductions from the control group. I’m no scientist, but I’m pretty sure those numbers are significant!

In addition to being a safe, all-natural sweetener, stevia has tangible health benefits to put it that much further ahead of sugar and artificial sweeteners on the “good choices” spectrum. Next time you’re craving something sweet, think about stevia as your sweetener of choice. It might benefit more than just your taste buds in the long run.