Stevia – Is It Safe? 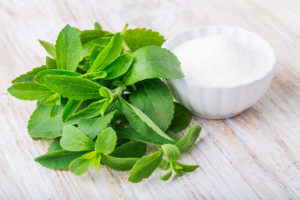 Stevia is one of the most popular sugar substitutes to gain prominence in recent years. Unlike most other sugar substitutes, stevia is not artificial or chemically induced. Other sugar substitutes have been scientifically documented and linked to cancerous tumors and other diseases. Stevia has not. It is a natural leaf extract that comes from a plant species called the Stevia rebaudiana Bertoni. It grows naturally in sub-tropical and tropical areas in Latin America, and it has been used for centuries by tribes in Brazil and Paraguay. The sweetness of stevia comes from two primary steviol glycosides – stevioside and rebaudioside. Stevioside is the component that has the bitter aftertaste many people complain about.

It is possible to purchase stevia sweeteners that only contain the non-bitter rebaudioside component. Unfortunately, isolating this component requires chemically induced alterations, so the resulting product (like Coca-cola’s famous Truvia brand) is highly processed and unnatural.

So Why Stevia’s Poor Reputation?

Now you might be thinking that a 100% natural leaf extract is probably better for you than chemically induced, artificial, man-made sweeteners. You would be correct! Unfortunately, stevia has gained somewhat of a poor reputation in some circles due to some studies that have been published regarding negative effects on fertility. So let’s go ahead and talk about those issues first.

Most concerns about stevia affecting fertility come from a very old study performed in 1968. In this study, female rats that were fed a concentrated mixture of stevia and water displayed a decrease in fertility.1 There was a reduction in offspring compared to rats that were not fed this mixture for up to 60 days after stevia intake was stopped. That sounds damning, but wait, there’s a catch! Actually, there are three catches.

First, the professor conducting the study used some materials from the stevia plant that are not ordinarily consumed along with the boiled stevia extract. Tests were not run on this these materials to see if they could have any kind of contraceptive effect.

Second, the rats were fed a stevia mixture at a rate equivalent to a person drinking 85 ounces in less than 30 minutes. This quantity is hundreds or even thousands times higher than the acceptable daily intake (ADI) of stevia, which is 4 mg/kg of body weight per day. ADI is defined as the amount of a substance that people can consume in food or beverages on a daily basis during their whole life without any appreciable risk to health.

Most of the healthiest substances in the world are harmful to the body at concentrations that high. Oxygen is essential to humans, yet too much oxygen at one time can cause severe brain damage, or even death. Likewise, too much water can lead to water intoxication, also known as hyponatremia, which causes the inside of cells to flood due to abnormally low sodium levels in the blood stream. In severe cases, water intoxication can lead to seizures, comas, or death. To put this in perspective relating to stevia, a 150 lb (70 kg) person would need to consume approximately 40 packets of a tabletop stevia sweetener daily in order to exceed their ADI.2 In order to simulate the same rat fertility study discussed above on humans, a person would need to consume thousands of packets of tabletop stevia sweetener each day. The reason that sounds so ridiculous is because it is ridiculous! I can’t even fathom consuming hundreds, let alone thousands of stevia packets in a single day. I’m guessing the same is true for you.

And finally, for the third catch, the professor only used the one highly exaggerated dosage level to test, completely ignoring the importance of a dose-response relationship.3

A More Recent Study Sheds a Different Light on Stevia

The collective effects of these issues can be seen in another study performed in 1991 in which hamster fertility was tested by feeding them stevioside in three separate dosages.4 10 male hamsters and 10 female hamsters were force-fed stevioside daily in dosages of 0, 0.5, 1.0, and 2.5 g/kg of body weight. No abnormalities were found in growth or in fertility for both sexes for all four groups. All males mated females efficiently and successfully. All females had normal oestrus cycles and became pregnant after mating. The results of this experiment show that stevioside dosages as high as 2.5 g/kg of body weight are not harmful to either growth or reproductive capabilities. Again, ADI of stevia is 4 mg/kg of body weight, so this experiment tested dosages more than 600 times higher than acceptable human dosages of stevia. Humarian’s own Probonix probiotic only has 0.19 mg of stevia per daily serving, which is 1,400 times lower than the ADI for stevia.

More recent studies have backed up the assertion that there is no evidence of stevia affecting fertility or pregnancy outcomes.5 In other animal studies, stevia did not increase toxicity in rat embryos, nor did it affect fertility or pregnancy outcomes. It is important to note that there is no data on the outcomes of use of stevia during human pregnancies.

But Those Are Not All The Stevia Concerns I’ve Heard

Some people have expressed concerns about toxicity levels of stevia, but studies have shown that stevia toxicity is not a concern at even highly concentrated levels.6 Again, Humarian’s own Probonix probiotic is sweetened with stevia at levels 1,400 times lower than the ADI.

And finally, some people have expressed concern that stevia consumption could lead to cancer on the basis of some assumptions regarding steviol glycosides. Fortunately, the research has proven otherwise. Not only is it not a carcinogen, several studies have shown that it actually has anti-cancer properties.

In conclusion, we have yet to find credible research to indicate that stevia could be dangerous in anything but the most ludicrous and unrealistic proportions. If you are planning to consume thousands of stevia sweeteners per day, you should probably reconsider. Otherwise, stevia has been shown to be safe in more than 200 studies and many other studies have demonstrated that it can provide health benefits over other kinds of sweeteners. We might even post a blog about some of those benefits soon. Stay tuned!