B. infantis – A common probiotic strain 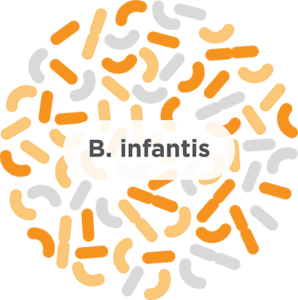 Bifidobacterium infantis (B. infantis) is a probiotic bacterium found in the guts of adults and children. It is also one of the main strains of good bacteria that are typically found in infants.  It has been the focus of research revolving around its ability to treat acute diarrhea in children.1 B. infantis has also been shown to alleviate some symptoms of irritable bowel syndrome (IBS) such as bloating, gas, diarrhea, constipation, and abdominal discomfort.2

Additionally, B. infantis has demonstrated antibacterial effects against pathogens like Clostridia, Shigella, and Salmonella.3 This is a pretty big deal, as these pathogens are responsible for many dangerous conditions. Clostridia are a class of bacteria that can cause food poisoning, gangrene, tetanus, and botulism. Shigella bacteria can cause severe diarrhea, fever, nausea, vomiting, stomach cramps, and it can lead to dysentery. Salmonella is the bacteria you’ve likely already heard of, which can lead to illnesses like typhoid fever and food poisoning. These antibacterial effects also suggest that B. infantis may be able to offer protection against gastroenteritis, more commonly known as the stomach flu. Lastly, it stimulates the production of important substances like cytokines, which are chemical messengers that serve an important role in regulating the immune system.