B. Longum – A common probiotic strain

Bifidobacterium longum (B. longum) is one of the many important probiotic bacteria found in the human body. It is one of the primary probiotics that is found naturally in breast-fed infants, and performs a number of beneficial functions in the body.1 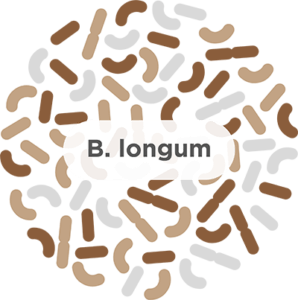 B. longum helps the gut to stay healthy

B. longum is known for being resistant to gastric acid and bile.2 This means that it is able to survive the acidic environment of the stomach and more effectively fight against bad bacteria and other harmful substances in the intestines. Similar to B. bifidum, one way it helps to keep the gut healthy is by binding to the intestinal cells in the intestines. Through this binding, B. longum is able to stop harmful pathogens from binding and getting into the body. Additionally, it is known to reduce gut inflammation and improve immune health.

So how does it work?

It works like this: When bad bacteria are passing through the gut, they have to latch on to cells in the intestines before they have time to do their dirty work. If they don’t attach to these cells, they’ll just pass on through without causing any harm. B. longum latches on to these same cells so the bad bacteria can’t. In a healthy gut, many of the intestinal cells will have B. longum or other healthy bacteria attached. This means that there are very few cells left for bad bacteria to grab onto before they’re swept out of the gut. Controlling the number of bad bacteria is very important for balancing the body’s immune system functions.

B. longum produces important B vitamins that help to lower homocysteine levels in the blood.3 This B vitamin production is important because homocysteine has been linked to cardiovascular disease (heart attack) and cerebral vascular disease (stroke) B. longum also inhibits the production of toxic bacteria and ammonia that can accumulate in an unhealthy body and lead to lethargy, irritability, poor feeding, and even seizures.4

B. longum is able to both raise and lower the pH balance of the intestines in order to help maintain a healthy balance in the gut. It can ferments sugars into lactic acid, which raises acidity by lowering pH levels in the intestines. It also raises acidity by producing hydrogen peroxide and acetic acid in the intestines. Maintaining a healthy balance in the gut is important because different bacteria require different acidic environments to flourish. B. longum is able to help the body create a balance that is beneficial to good bacteria but makes it difficult for harmful bacteria to survive.

B. longum can help with more than just general gut health

Some studies on the positive effects of B. longum suggest that it may be able to help with constipation associated with weight loss, some allergies and allergic diseases, high cholesterol levels, inflammation associated with Crohn’s disease and colitis, and even cancer. One such study showed that B. longum supplementation in rats with colon cancer helped to prevent the cancer from spreading and stopped tumors from growing further. Other clinical trials have demonstrated effectiveness in the prevention of relapse in Ulcerative Colitis patients.

B. longum is an important part of maintaining a healthy gut because of its abilities to keep harmful bacteria out and keep pH levels in the intestines in check. Keep your eyes peeled for this important strain the next time you’re shopping for a probiotic supplement.