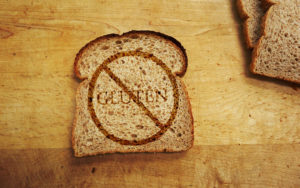 Gluten-free is “in”. From restaurants to grocery stores to popular snack foods, everyone is cashing in on the gluten-free craze, largely due to a growing public perception that going gluten-free is healthier. While a gluten-free diet has not been shown to offer benefits for healthy individuals, it is THE way to go for those with celiac disease. In fact, a strict gluten-free diet is currently the only known treatment for celiac disease. Since May is National Celiac Disease Awareness Month, we thought this would be a good opportunity to bring attention to this serious autoimmune disorder.

Celiac disease is a genetic autoimmune disease (a disease in which the body attacks itself) where consumption of gluten leads to damage in the small intestine. Celiac disease affects nearly 3 million Americans, and roughly 1 in 100 people are affected worldwide. Nearly 80% of people with celiac disease are currently undiagnosed. When gluten is consumed, the body initiates an immune response that attacks and damages the villi on the small intestine. The villi are small, fingerlike projections that line the small intestine and promote nutrient absorption. When they are damaged, nutrients cannot be properly absorbed into the body. In the short term, this damage can lead to diarrhea, fatigue, weight loss, bloating, anemia, nausea, and nutrient deficiencies. If left undiagnosed and untreated, people with celiac disease are at risk of long-term health conditions like anemia, thyroid disease, cancer, lactose intolerance, infertility, seizures, osteoporosis, and more.

Celiac disease is currently the only autoimmune disease with a known trigger: gluten. Gluten is the protein found in wheat, rye, and barley. It acts as a sort of glue that helps to hold foods together and maintain their shapes, and it is responsible for giving many baked products a chewy texture. It is found in a large variety of foods associated with grains (bread, pasta, cereal, soup, beer) as well as some foods that are not commonly thought of as containing grains (salad dressings, food coloring, fries, candy, pre-seasoned meats).

Can I prevent it? How do I treat it?

Unfortunately, preventing celiac disease is not possible since the exact causes are still unknown. It is believed to occur due to some combination of genetics, diet, environmental factors, infant feeding practices, and gut bacterial composition. Celiac disease can affect anyone, but it is more common in people that have type 1 diabetes, Down syndrome, Turner syndrome, Addison’s disease, autoimmune thyroid disease, or a family member with celiac disease.

Thankfully, individuals with celiac disease can effectively treat the symptoms by completely eliminating gluten from their diets. This sounds like a simple fix, but it can be difficult in execution. Even small amounts of gluten (like crumbs from a cutting board or ingredient cross-contamination at a restaurant) can be enough to cause damage to the small intestine. It can also be difficult to find gluten-free options while eating out at restaurants. Choices can be limited, and ingredient-cross contamination is always a potential fear unless otherwise guaranteed by the restaurant. Fortunately, some positive side effects of the gluten-free health craze are that gluten-free options have improved drastically over the last several years for those with celiac disease, and awareness for individuals with gluten sensitivities and celiac disease has increased dramatically.