Overeating and How the Brain Reacts to Food 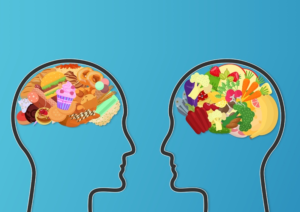 People tend to assume that they stop eating when they feel full, but many of us don’t. Why do we overeat? Some people overeat because their portion sizes are too big, and they don’t stop until their plate is clean. Others eat too much because they’re overly stressed, emotional, or just plain bored. Sometimes a dish is just so good that it feels wrong to let it go to waste. Scientists have long thought that certain individuals are more predisposed to overeating than others, but research as to why this is the case is ongoing. According to a pair of new studies, the way our brains reward us for eating may play a significant role.

The first study relates to how the brain reacts to food, particularly in children.1 In this study, children were given fMRI scans while playing a game. They were told that their prize for winning the game would be money, candy, or a book. In children where certain regions of the brain reacted more strongly to being rewarded with food than being rewarded with money, the likelihood to overeat was greatly increased. This was true regardless of how hungry the child was or how much they weighed.

This study suggests that the certain individuals are more vulnerable to overeating than others because of the way their brain responds to food rewards. “If we can learn more about how the brain responds to food and how that relates to what you eat, maybe we can learn how to change those responses and behavior,” said Shana Adise, a postdoctoral fellow at the University of Vermont who led the study while earning her doctorate at Penn State. By focusing on children in this study, Adise and her team hoped to find insight into how to prevent overeating at a young age that could translate into better dietary control into adulthood.

The second study focuses on how our brains reward us for eating.2 It shows that dopamine (a neurotransmitter that is commonly known as the main chemical of pleasure and desirability) is released in the brain when food is first ingested, then a second time when food reaches the stomach. In this study, the amount of dopamine released when first tasting was directly proportional to the participants’ craving or desire for a particular food item.

However, while higher cravings led to more dopamine released upon first taste, it lowered the amount of dopamine released when food hit the stomach. “We continue to eat until sufficient dopamine was released,” says Heiko Backes, group leader for Multimodal Imaging of Brain Metabolism at the Institute and co-first author on the study. This means that foods that elicit higher craving responses can suppress the second hit of dopamine and lead to overeating. Both of these studies help to explain why some people find it difficult to resist finishing a pint of ice cream or an entire bag of chips, or why we’re so much more likely to overeat sugary, fatty junk foods than nutritious fruits and vegetables. While it is certainly not the only culprit to blame for overeating, it is clear that the way the brain responds to food plays a significant role.