The Joy of Giving Lasts Longer than the Joy of Getting 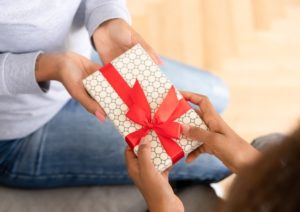 The holidays are upon us! ‘Tis the season for giving, and with that, the season for getting. If you’re anything like me, you may be guilty of using the holiday season as a time to get some of that cool stuff you’re “too responsible” to buy for yourself. Getting cool stuff is the essence of happy holidays, right? Those far wiser than I would say no, it’s giving that’s key to happiness. Your eyes might have instinctively rolled to the back of your head after reading that, but what if I told you that science agrees?

That’s not to say that receiving gifts doesn’t increase happiness. It absolutely does, but only to a limited degree. This is due to a principle known as the hedonic treadmill, or hedonic adaptation. Hedonic adaptation is the tendency for people to quickly return to a stable level of happiness despite major positive or negative events. In other words, and to relate back to the topic at hand, receiving gifts has diminishing returns on happiness.

This was proven true in studies from the University of Chicago Booth School of Business and Northwestern University Kellogg School of Management in late 2018.1 In one study, participants received $5 every day for 5 days. They were required to spend the money on the exact same thing every time. Those that spent the money on themselves reported a steady decline in happiness over the 5-day period. In a second experiment, participants played 10 rounds of a word puzzle game and received $0.05 for each round they won. Those that kept the money reported declining happiness levels as the rounds progressed. These results were consistent with what scientists expected from the hedonic treadmill.

What the scientists didn’t expect were the results from those that gave their rewards away. In the first study, participants that did not spend the money on themselves were required to spend it on someone else, like throwing it in a tip jar at a café or donating it to an online charity. Participants in the second study that did not keep the winnings were required to donate them to a charity of their choice. In both studies, the self-reported happiness of those that gave either did not decline, or it declined much more slowly than those that kept the rewards.

The results suggest that giving may be an exception to the hedonic adaptation treadmill. Researchers still don’t know exact reasons for why this may be true, but some theorize that focusing on outcomes, like getting paid, makes it easier to make comparisons and diminish sensitivity to subsequent similar outcomes. Focusing on actions, like donating to charity, is less likely to lead to these comparisons. Each act of giving is more likely to be experienced as its own unique happiness-inducing event. Another theory is that we may be slower to adapt to happiness generated by giving because it reinforces our sense of social connection and belonging.

Regardless, it seems Robin Sharma had it right when he said, “Remember that the happiest people are not those getting more, but those giving more”. So this holiday season, consider focusing more on giving gifts than receiving gifts, both for your loved ones and for yourself.