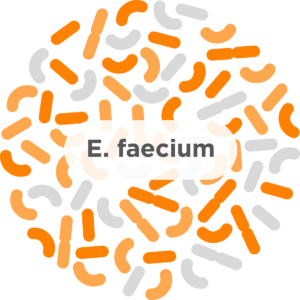 Enterococcus faecium (E. faecium) is a probiotic bacterium found in the guts of humans and animals. It is a lactic acid bacterium, which may seem odd, as it is not in the Lactobacillus genus like all of the other lactic acid bacteria we have covered thus far. Research has shown that E. faecium can have beneficial effects for humans and animals alike, but we’re going to focus on animals in this article. More specifically, E. faecium is one of the most well researched bacterium in the realm of probiotics for dogs and cats.

Studies show that E. faecium could help to reduce morbidity (the condition of being diseased) in cats that suffer from feline herpesvirus 1 (FHV-1).1 This is an extremely common viral infection in cats that can lead to ocular and respiratory signs of disease. The cats that were supplemented with E. faecium maintained a more stable microbiome than placebo cats. The results of these studies suggest that E. faecium supplementation in cats with FHV-1 could help to reduce the likelihood of associated disease symptoms associated with the virus. Another study demonstrated that E. faecium may also help to improve immune functions in cats.2 Throughout this study, nine kittens were supplemented with E. faecium. The group that received the E. faecium treatment had significantly higher levels of CD4+ lymphocytes than the control group by the end of the study. CD4+ lymphocytes, also known as helper T cells, are the cells that are destroyed by HIV in humans and FIV in cats.3 They help to coordinate the immune response by stimulating other immune cells, such as macrophages, neutrophils, B-lymphocytes, and CD8 T lymphocytes in order to fight infection. If E. faecium can reliably increase CD4+ numbers with regular supplementation, it could be a possible avenue for boosting immune system capabilities in cats E. faecium can reduce the occurrence of diarrhea in cats. Another 2011 study conducted on 217 cats housed in an animal shelter over a period of four weeks showed that 20.7% of the cats that were supplemented with a placebo had diarrhea during the study, while only 7.4% of the cats that were supplemented with E. faecium suffered from diarrhea.4

There have been numerous studies on gut microflora and the ability of probiotics to enhance immune functions in humans and laboratory animals, but studies have tested this hypothesis specifically on dogs.5 The results demonstrate that E. faecium can boost immune functionality in dogs, as both fecal IgA and certain kinds of circulating IgG and IgA were higher in dogs that were supplemented with E. faecium starting when they turned eight weeks old and continuing until they turned one year old. IgG and IgA are important proteins created by the immune system to fight off antigens in the body, like bacteria, viruses, and toxins. Studies have also shown that E. faecium can have positive effects on non-specific immune responses in healthy dogs.6Cell counts and activity for immune system cells that help form the generalized immune response (the first-responders of the immune defense) were compared between dogs supplemented just once with this bacterium and dogs without the supplement. Other studies have demonstrated that E. faecium has the capacity to fight off Salmonella spp., E. coli, Pseudomona spp., Proteus spp., and other potentially pathogenic bacteria that can be common animal feed contaminants or food intoxication agents. This is because E. faecium produce substances with the capacity to inhibit the growth of these pathogenic bacteria. The results of this study indicate that dogs regularly supplemented with E. faecium may be better prepared to deal with contaminants commonly found in dog food products. As you can see, the potential benefits of E. faecium are significant. It can alleviate diarrhea, boost immune functions, and even help to deal with common contaminants in store-bought food. Research is ongoing for the benefits of probiotics in animals, but there is already sufficient data to support the potential benefits of E. faecium as a probiotic supplement for cats and dogs.