Lactobacillus reuteri (L. reuteri) is a probiotic bacteria that lives in the mouth and gut of people. It is most commonly known for its benefits in treating several childhood ailments, but healthy doses of L. reuteri are capable of providing a wide range of benefits for people of all ages. 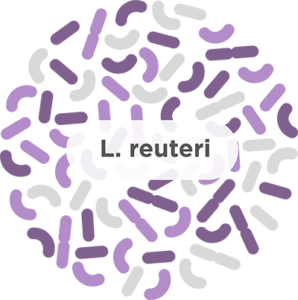 L. reuteri is one of the best probiotics for babies and children with colic

L. reuteri is able to aid or prevent a range of health issues in babies and children. One of the most notable benefits is its effectiveness in treating infantile colic.1 Colic is a condition that causes stomach pain in babies and often results in bouts of crying for hours at a time. It is a common condition without a surefire medical solution. According to some recent studies, babies that are given regular L. reuteri supplements spent less time crying each day from colic pain than children given simethicone, the traditional colic therapy.2

And diarrhea especially when it’s from rotavirus

Another fantastic benefit of L. reuteri in children is its ability to help prevent and cure diarrhea, especially when that diarrhea is a symptom of rotavirus. Rotavirus is a viral infection that can lead to diarrhea, dehydration, and many other harmful effects. Rotavirus causes around 500,000 deaths each year in children five years old and younger. Children that are given L. reuteri have been shown to recover much more quickly from this potentially deadly illness.3

And then there’s NEC

L. reuteri has also been shown to reduce the risk of NEC, a deadly condition in premature babies. According to recent studies, premature babies supplemented with L. reuteri have a greatly reduced risk of suffering from NEC than babies without L. reuteri supplementation. Probiotic-supplemented babies also showed some other wonderful improvements, like reduced feed intolerance, reduced late-onset sepsis, and less time needed in the hospital before release.

Finally, L. reuteri has been shown to help prevent eczema in children. Eczema is a group of diseases that can cause dry, itchy skin and rashes. It is relatively common in babies and can worsen with age if left untreated.  Eczema can be treated with skin creams, but recent studies have shown that infants from mothers who take L. reuteri supplements during pregnancy are less likely to develop eczema in the first place.4

It has great benefits for adults too!

Children aren’t the only ones that can benefit from L. reuteri. Regular doses have been shown to have a wide range of beneficial effects in adults. Some well-researched benefits include preventing workplace sickness, relieving constipation, promoting regular bowel movements, preventing and treating female Urinary Tract Infections (UTI’s),  and reducing the presence of Helicobacter pylori (H. pylori), a harmful bacteria that has been linked to peptic ulcers and gastric cancer.

L. reuteri has been shown to assist in repairing leaky gut. Leaky gut is a syndrome that can lead to a range of uncomfortable symptoms, including bloating, gas, cramps, aches and pains, and food sensitivities. It has also been shown to support dental health because it is the only probiotic found in the mouth with the ability to kill off certain kinds of bacteria that cause tooth decay. Healthy levels of L. reuteri are able to keep these bacteria in check and keep your teeth intact.5

It functions as a naturally occurring antibiotic

Now if you’ve been following along with any of our previous blog entries or done some general research on probiotics, you might be wondering why a probiotic is producing an antibiotic substance. Aren’t antibiotics responsible for killing off healthy bacteria in the gut? Absolutely! However, the reuterin produced by L. reuteri is an exception because it is produced in very specific amounts. L. reuteri would need to produce 4-5 times the amount of reuterin that is necessary to kill bad bacteria in order to kill the good bacteria in the gut.

Summarizing the greatness of L. reuteri

As you can see, L. reuteri offers a wide range of health benefits for children and adults alike. Unfortunately, many people do not have enough of this great probiotic to reap its many benefits.