Lactobacillus rhamnosus (L. rhamnosus) is a probiotic bacteria that is most well-known for having incredible tolerance to the harsh gastric acid and bile found in the stomach and digestive system. Due to this extraordinary resilience, L. rhamnosus is an important element for promoting and maintaining digestive tract health. 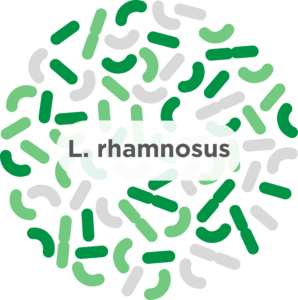 So it’s tough… what does that mean for me?

The harsh environment of the stomach is a very important for killing off harmful pathogens that are ingested with food. Most bacteria are not able to survive a trip through the stomach acid. That’s why the majority of probiotic supplements can only claim survival rates of 10% or less! The resiliency of L. rhamnosus makes it much more effective in dealing with intestinal issues than other probiotic strains for this reason.

L. rhamnosus helps to maintain the balance of good and bad bacteria in the gut through something called competitive adhesion. This means that when molds and other bad bacteria are passing through the gut, they have to latch on to cells in the intestines before they have time to cause harm. If they can’t attach, they’ll just pass on through without causing any harm. Much like B. bifidum, L. rhamnosus latches on to these same cells so the bad bacteria can’t. In a healthy gut, most of the intestinal cells will have healthy bacteria attached to them. This means that there are very few cells left for bad bacteria to grab onto before they’re swept out of the gut, and controlling the number of bad bacteria is very important for balancing the body’s immune system functions. Additionally, L. rhamnosus also helps the immune system by stimulating the production of antibodies. These antibodies help to fight off pathogens, like bad bacteria and fungi, in the gut.

Immune support is the most important function of L. rhamnosus because of its resiliency, but it can also help with constipation, common digestive illnesses, and digestion.

Constipation is less of an issue for individuals with healthy levels of L. rhamnosus because it stimulates mucous production in the intestinal tract which leads to smoother bowel movements. Similar to L. reuteri, L. rhamnosus has been shown to help in the treatment of infectious diarrhea in children. It also helps to soothe some of the symptoms of irritable bowel syndrome (IBS)1, and it can be an effective alternative for treating urinary tract infections (UTI’s) when antibiotic resistance is an issue.

Help for the lactose intolerant

L. rhamnosus encourages the growth of helpful organisms in the digestive tract that aid in digestion. One of the most exciting examples of this is in lactose intolerant individuals. If you read our B. bifidum blog, you know that lactose intolerant individuals don’t have the enzyme that breaks down lactose. This enzyme is called lactase. People can have lactase deficiencies for a number of reasons. Some people are unable to produce lactase because of damage to the lining of their gut, while others are simply born without the ability to produce it. A study conducted in 1998 showed that lactose intolerant people that consume milk with L. rhamnosus do not suffer from an inflammatory reaction. This is due to the fact that L. rhamnosus encourages the growth of organisms in the digestive tract that serve a similar function to lactase.

Regular probiotic supplements of L. rhamnosus are highly recommended because it plays a critical a role in both immune system support and digestive health. Its ability to survive the harsh environment of the stomach and intestinal tract means it can bolster immune functions where other helpful bacteria simply can’t survive.