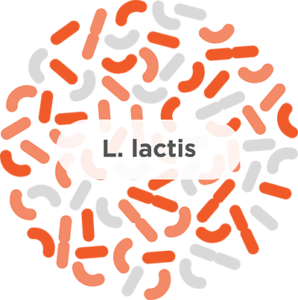 L. lactis, a probiotic bacteria, is commonly found in everyday life more easily than other traditional probiotic strains. You’ve probably had some from eating cheese or drinking beer at some point. This is due to the fact that L. lactis has the ability to produce lactic acid, making it extremely important for manufacturing pickled vegetables, buttermilk, cheese, and other dairy products. In addition to helping create all kinds of delicious foods and drinks, this probiotic strain is able to provide the body with a number of benefits, like dealing with antibiotic-resistant pathogens and reducing blood pressure.

One of the most promising recent studies shows that L. lactis bacteria could be instrumental in treating vancomycin-resistant enterococci (VRE), such as E. faecium, and other antibiotic-resistant bacteria.1 During this study, antimicrobial peptides delivered by L. lactis were able to reduce pathogen counts by 10,000 fold in laboratory settings. Scientists believe that this kind of delivery system could also be used in conjunction with traditional antibiotics to slow the development of antibiotic resistance.

In addition to treating some antibiotic-resistant bacteria, another recent study suggests that L. lactis has an inhibitory effect against several kinds of fungi in genera Aspergillus, Fusarium, and Candida.2 This indicates that L. lactis may be able to keep mold and fungi at bay in the gut.

Some scientists have provided evidence that L. lactis can prevent and reduce intestinal inflammation.3 With the anti-inflammatory properties suggested in the study, L. lactis could serve a role in the treatment of Inflammatory Bowel Disease (IBD).

Lastly, there has been research suggesting that L. lactis may help to lower blood pressure, LDL cholesterol, and triglyceride contents in individuals with hypertension.4 L. lactis can also serve a role in alleviating allergies.5

Though L. lactis is found in a number of foods and drinks, your body may require more if you want to reap the many benefits described above. Research suggests that it could be used in conjunction with antibiotics to help to slow the development of antibiotic resistance. This fact alone makes it a probiotic strain you’ll want to keep an eye on!