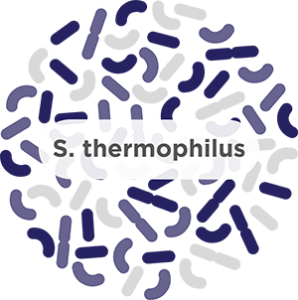 Streptococcus thermophilus (S. thermophilus) is a probiotic bacterium found in the digestive tract. It is one of the two original bacterial strains used to make yogurt. This acid-resistant strain is one of the most effective at modulating the immune system, improving digestive health, and competing against unhealthy bacteria.

As one of the two primary starter bacteria for yogurt and dairy products, S. thermophilus has particularly strong resistance to acidic environments.1 This resistance extends to stomach acid and bile in the body. This means that it is able to survive the acidic environment of the stomach and more effectively fight against bad bacteria and other harmful substances in the intestines. Similar to B. bifidum and B. longum, S. thermophilus helps to keep the gut healthy by binding to the intestinal cells in the intestines. Through this binding, it is able to stop harmful pathogens from binding to intestinal cells and making their way into the body. Additionally, it is known to reduce gut inflammation and improve immune health. It works like this: When bad bacteria are passing through the gut, they have to latch on to cells in the intestines before they have time to do their dirty work. If they don’t attach to these cells, they’ll just pass on through without causing any harm.  S. thermophilus latches on to these same cells so the bad bacteria can’t. In a healthy gut, many of the intestinal cells will have S. thermophilus or other healthy bacteria attached. This means that there are very few cells left for bad bacteria to grab onto before they’re swept out of the gut. Controlling the number of bad bacteria is very important for balancing the body’s immune system functions.

Another notable benefit of this probiotic strain is its ability to help digestion in lactose intolerant individuals.2 Lactose intolerance is caused by a deficiency of the enzyme that breaks down lactose. This enzyme is called lactase. People can have lactase deficiencies for a number of reasons. Some people are unable to produce lactase because of damage to the lining of their gut, while others were simply born without the ability to produce it. Similar to B. bifidum, S. thermophilus has the enzymatic capabilities to break down lactose, so it can help lactose-intolerant individuals by serving as a pseudo replacement for lactase.

S. thermophilus is able to regulate immune functions in the body in several different ways. Some studies have shown that S. thermophilus can provide anti-inflammatory benefits3 and can help to stimulate production of helpful macrophages.4 Other studies have suggested that it has the ability to stimulate epithelial cell regeneration.5 Epithelial tissue lines many important organs in the body, including the entire gastrointestinal system, so the ability to regenerate this tissue more effectively could be hugely beneficial. S. thermophilus also provides many benefits that are shared by some other probiotics, such as inhibiting antibiotic-associated diarrhea,6 and improving oral health.7 It is also able to significantly reduce the frequency of colic and intestinal irritability.8

S. thermophilus is an important part of maintaining a healthy gut due to its ability to keep harmful pathogens out of the gut and its ability to give the immune system a boost. If the benefits of this probiotic strain sound appealing to you, make sure you are getting a good dose in your daily probiotic supplement.