Probiotics and Immune Health in the Elderly 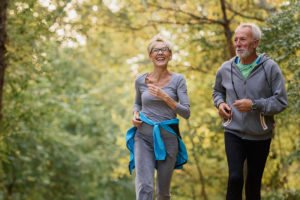 Immune health is important at any age, but it becomes increasingly important as we age. This is due to a principle known as immunosenescence, which refers to the gradual deterioration of the immune system brought on by natural age advancement. Immunosenescence is tied to difficulty developing immunities after vaccinations, reduced ability of lymphocytes (T and B cells) to fight off infections in the body, increased susceptibility to disease due to epithelial barrier deterioration, and more. Some of the deterioration tied to immunosenescence is caused by secondary factors associated with age, such as lessened physical activity, changing dietary needs, and an increased need for medication.

The diversity of flora in the gut has also been shown to decline as we age. This has been tied to decreased effectiveness of digestion and gut immune function. We know that approximately 60-70% of your body’s immune system surrounds the GI tract, placing it in the perfect position to intercept harmful substances that are ingested and prevent them from entering the body. As discussed in our blog on probiotics and the immune system, probiotics aid the immune system by producing reuterin, suppressing the growth of harmful bacteria, improving resistance against influenza, providing anti-inflammatory benefits, and much more.

A 2017 study1 demonstrated that healthy elderly people have microbiota compositions extremely similar to those of younger people, while the composition of unhealthy elderly individuals is much different. The diverse microbiome remained a constant throughout all healthy elder individuals in this study. The results of this study support other studies demonstrating the beneficial effects of probiotic bacteria in elderly people. L. gasseri has been shown to enhance immunity in the elderly by increasing T cell count. T cell count decreases as we age, reducing our ability to fight off infections in the body. Studies on L. fermentum have shown that it can support healthy aging by helping to resist infections and improve antioxidant capacity. Probiotic bacteria have also been shown to help with Alzheimer’s disease, the most common form of dementia in the elderly. In this study, it was demonstrated that a daily dose of probiotic bacteria taken over a period of just 12 weeks was enough to yield a moderate but significant improvement to the cognitive capabilities of Alzheimer’s patients aged 60 to 95.

We now know that the gut flora of healthy elderly people is similar to healthy young people, so we can be sure that diverse and healthy gut flora is associated with good health at any age. In addition to proper nutrition and exercise, taking steps to maintain a healthy gut is just one more way for us to stay healthier as we age.