Probiotics and the Immune System 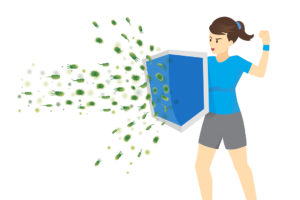 Can probiotics strengthen your immune system? It is a commonly mentioned claim when probiotics are discussed, but rarely explained. As we explained in an earlier blog about Leaky Gut, the gastrointestinal (GI) tract is technically outside of the body. It may sound strange, but you can think of it in the same way that the hole in the middle of a donut is not actually part of the donut. Food passes through the GI tract, but it does not actually enter the body until it is digested and absorbed into the bloodstream and surrounding tissues. Because of this, it makes sense that approximately 60-70% of your body’s immune system surrounds the GI tract. This puts it in the perfect position to intercept harmful substances that are ingested and prevent them from entering the body.

It also means that probiotics in the gut encounter these harmful substances before they have a chance to make it to the immune system. This is relevant for a strain like L. reuteri which produces a natural antibiotic substance called reuterin. Reuterin helps to keep the intestinal microbiota healthy by inhibiting the growth of several kinds of harmful bacteria, yeast, and fungi. L. fermentum is another strain that that has demonstrated the ability to suppress the growth of harmful bacteria, like staphylococci, toxic enterobacteria, and common hospital-acquired infections like S. aureus and P. aeruginosa. Recent studies also suggest that it could improve resistance against influenza infections by increasing immune response and virus-neutralizing antibodies.

Probiotics have also been shown to provide benefits in modulating elements of the body’s immune functions. A recent study found that helpful bacteria were able to co-exist peacefully with the immune system by moderating active vitamin A levels in the intestine to prevent an overactive immune response. This could have great implications in dealing with autoimmune disorders. By controlling the expression of a certain protein that manages vitamin A levels, researchers were able to reduce the number of immune cells that coordinate antimicrobial responses against gut bacteria.

Specific strains have also been found to have positive effects on the immune system. S. thermophilus  is a strain that has demonstrated an ability to regulate immune functions in the body in multiple ways. Some studies have shown that S. thermophilus can provide anti-inflammatory benefits and help to stimulate the production of helpful macrophages. Other studies have suggested an ability to stimulate epithelial cell regeneration. Epithelial tissue lines many important organs in the body, including the entire gastrointestinal system, so the ability to regenerate this tissue more effectively could be hugely beneficial.

B. infantis is of great interest in immune research due to research demonstrating its ability to stimulate the production of important substances like cytokines. Cytokines are chemical messengers that serve an important role in regulating the immune system. They do so by facilitating cell-to-cell communication in immune responses, directing immune responses toward areas suffering from inflammation or infection, and more. Other studies have indicated that L. brevis may enhance white blood cell function and increase antiviral activity towards the herpes virus. L. paracasei has been shown to help to positively augment mucosal immune responses, and studies have shown that supplementation with B. breve can help to protect from infection and inflammation by enhancing the mucosal barrier.